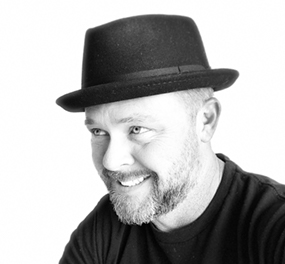 Dave's a no-nonsense kind of guy. What you see is what you get. No bullshit, no tie, no flashy car-salesman lines. Although he's not without his flaws, he does think he's pretty awesome. Dave has played in local bands since his senior year in high school and recorded over half a dozen albums. He first cut his design teeth on album covers, promotional items and other marketing materials during this time. After playing the struggling rock star and tired of working construction, Dave finally decided to go back to school and get a degree. That's when he chose to follow his earlier passion for design as a career path. Dave may have a rough exterior and a tough attitude that reaches far beyond his 5'6" stature, but make no mistake, he produces designs that succeed in getting results. ROI is number one, but he also loves getting his clients a "Hey, that kicks ass!" from a friend or mentor.